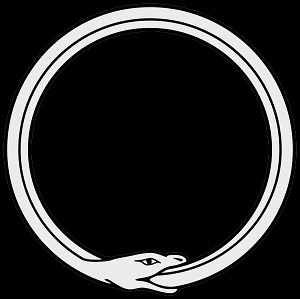 Upon mulling over the tale of Edward Snowden & the NSA, it conjured to my mind the image of an ouroboros – a serpent eating its own tail. I found this quite interesting, as the snake is 1) a symbol of Pluto energy and 2) also another word for traitor. Interesting, and decidedly not coincidental as these two appear to have a mutually parasitic relationship to one another where they do seem to be going around & around in an eternal circle….

The story of the NSA scandal has Saturn/Pluto written all over it on a number of levels. The government (Saturn) reaped the consequences (Saturn) of spying (Pluto) on its citizens w/ Snowden’s exposure (Pluto) of what the NSA has been secretly doing to ordinary US citizens, however to utilize a coarse (but true) colloquialism, “shit rolls downhill” and Snowden himself faced stiff consequences for breaching security from high-level officials, including the president. This example is not intended so much as a political statement of whether or not Snowden was “in the right” for his actions; rather to illustrate the interconnectedness of the Pluto in Capricorn and Saturn in Scorpio mutual reception we’ve had in play since late 2012. Pluto in Capricorn = corruption of government, government secrets. Saturn in Scorpio = consequences of spying, the reality of corruption. Pluto in Capricorn is also most definitely a boundary-buster influence, and we can see this in both the NSA’s breach of the privacy of the American people and in Snowden’s reveal of government secrets. Both their reputations (Saturn and Capricorn influence) have been stained (Pluto and Scorpio influence). Both are paying a heavy price.

Do two wrongs make a right?

Personally, I struggle with this question. As much as I want to say “no”, there is a large part of me that has admiration for the toll Snowden chose to pay for doing what he felt was the “right thing” by watching the watchmen. It may be more worthwhile to consider whether “No good deed goes unpunished”, as it is the right thing that is oftentimes the hardest.

Perhaps this is what separates Snowden’s choice from the government’s – Snowden knew he would pay dearly for his choice to reveal these secrets and despite this knowledge decided to pay the piper – at least in part – through being blacklisted as an enemy of the state and knowing he would never be able to return home again. The NSA, however, seemed to think it could act with impunity and get away with this scot-free, because, as they say in Latin, “Quis custodiet ipsos custodies?” Consideration was not given to what would happen in the event of a leak, and when what you’re doing basically boils down to a complete violation of the 4th amendment, it’s little wonder The People called into question the righteousness of such a practice and that trust in the government was severely degraded by such a reveal. Pluto and Saturn, when strongly combined as they are now, do have the potential to have a very totalitarian streak when done in Lo-Fi, so it’s entirely possible that Snowden genuinely thought he was protecting (Saturn) the privacy (Pluto) of ALL through his actions and wanted to check this energy before it got any further out of hand. The issue with the NSA, on the other hand, is they seemed to think they could spy on private citizens with complete impunity, as if they were somehow “above the law”. But it seems Saturn – Divine Law – may just have come knocking; demanding the toll be paid by contracting an agent (Snowden) to do an “inside job”. There is a reason why this planet is called the Lord of Karma! Just desserts? Maybe. And if Saturn demands further accountability, perhaps there will be more to come from these two before it leaves Scorpio for good in 2015. If not, then it would seem they’ve each paid their dues, whether or not we like how it shook out…..

Also? This story provides a really good case-in-point for re-examining how we interpret mutual receptions in astrology!