I was walking up to the wide double doors at my gym when out of the corner of my eye I spied a lovely young lass approaching from my left. As I opened one of the outermost doors for myself, I paused to hold it open for her as well and she responded by saying “Thank you so much – here, let me return the favor” as she proceeded to beckon me through the secondary set of doors leading into the building. As I walked through, I smiled and replied “One good turn deserves another”, all the while thinking what a Jupiter in Libra statement this was and wondering if she were a fellow Libran – perhaps the whole interaction had played out the way it did due a mutual energetic affinity with one another.

Building upon a previous post wherein I discussed some of the themes of Jupiter’s year-long tour of Libra and outlined some of the better ways to use this energy, one of the biggies with this placement is indeed the concept of reciprocal blessings and how one good turn really does deserve another. I asked my readers to contemplate whether they give as good as they get, and this mundane little tale about my goings-on at the gym is a precise and yet small-scale illustration of WHY it’s so important that we do so under this energy.

I just wanted to be nice, courteous, and to do a good deed for another – that’s all. It feels good – there was no expectation attached to the outcome or any hope for personal gain involved in doing so. But when the other party benefited from this straightforward and honest gesture of kindness, her appreciation led her to reciprocate. It’s a beautiful thing, really – this is what I mean when I said others help to bring out the best in us now. Our relationships are mirrors, and when our own vibe is up it tends to attract others who are similarly geared – we BOTH benefited from politely and harmoniously interacting with one another. I also particularly love the metaphor inherent in opening the door for someone – it symbolically represents both an invitation AND an opportunity, if you think about it. So be good and generous and to others, because they will be good to you! 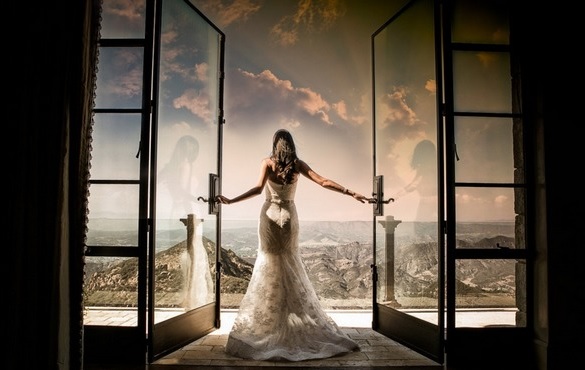 Equinox Blessings! This is what the present conjunction of the Sun + Jupiter in Libra looks like on the western horizon; quite possibly the most gorgeous sunset I have ever personally witnessed! The photo above is totally unenhanced and the colors were absolutely unreal; a Parrish-esque smattering of apricot, peach & plum captured in the clouds as daylight waned and faded softly into the night. Traditionally the Sun is said to be “in its fall” in Libra, meaning “in a weakened state”. While this is certainly true on a physical level here in the Northern Hemisphere as the days grow shorter and its light & heat diminish, I myself am quite fond of this energy and find it to be a lovely placement – I fully acknowledge that I am biased, though, having some Libra energy myself.  😉

Libra is the sign of beauty and when the Sun graces this sign while boosted by Jupiter, the glory of the Sun becomes super enhanced; particularly at sunrise & sunset when these planets crest over the angular astrological plane we know as the horizon.  If you haven’t had an opportunity to appreciate just how stunning the Sun can be at these times, do make it a point to get out at dawn or dusk and take it all in over the next few days – you won’t be disappointed.  ❤

Today’s lunar eclipse in Libra definitely has our feelings about relationships taking center stage! Libra is the sign of partnership after all, and when I take into account Venus – the ruler of this eclipse – being rather prone to mooning over lost unions during its current tour of Pisces, I’ve been getting a wicked “White Flag” vibe off this lunation.

“But I will go down with this ship;
And I won’t put my hands up and surrender
There will be no white flag above my door
I’m in love
And always will be.

And when we meet
Which I’m sure we will
All that was there
Will be there still
I’ll let it pass
And hold my tongue
And you will think
That I’ve moved on….”

As of this post’s publication, Venus has been conjunct Neptune for several days now, which has definitely heightened the inclination to pine for Love; possibly to even become a martyr to it.  These two planets are parting – perhaps with a bit of sweet sorrow – as we speak, but the vibe of this eclipse will be a slow one to dissipate while Venus moves toward the South Node and then Chiron over the next week or so.  What we don’t want to do, then, is take a cue from Dido and go down with the ship!

I think whenever we have truly loved someone, it can be hard to release the ideal of “Happily Ever After”. But Love is not a fairy tale, and so the dream can fade as partners go their separate ways. I believe it is important – when this happens – to honor the love that was there, yet to also recognize when a connection no longer has relevance in our lives.  It is sad, yes, but to sentimentally insist we will always be *in love* with someone discounts the possibility they served a spiritual purpose in our lives for the time they were in it and the connection was meant to be ephemeral.  If we cling to the past like this instead of blessing and releasing, how will we ever move forward and come to fall in love with Another in the future?

I propose that if we find ourselves reflecting upon a past partner at this time and wanting to reach out to them, we also need to be careful of our motivation for doing so.  It’s one thing if we feel as if we need to apologize for causing someone pain, but we should be aware this often isn’t experienced as helpful or healing to the other party involved and that what we may really looking for is absolution for ourselves.

Reflecting upon my own past loves, I can say that when I’ve been able to look at my past Self via the mirror of relationship and felt I’ve had something to apologize for,  I’ve never been shy about doing so.  But I’ve also never sought out an ex expressly for this purpose, either – fate simply intervened and brought us back into contact again, though only for the sake of expressing our mutual regrets and then releasing the attachment for good….a true case of “touch and go”.  I do think I will probably always love anyone that I’ve ever genuinely been in love with to a degree, but it is a very different feeling to me than actually still being *in love* with them.  I harbor the kind of vague, dormant affection one might for an old friend that hasn’t been seen in many years.  You acknowledge the history and love what they represented to you at one point in your life, but you also don’t linger in the past.  And with this Libra Eclipse infused with energy from the Aries Sun & Mercury plus its contact to Mars, it is all about living in The Now and being ready to embrace The New.  So if you catch yourself humming “White Flag” whilst pondering an ex, surrender the attachment as best you can.  Give it up to God/Goddess/The Universe.  And trust that if there were loose ends meant to be tied up, that you won’t have to go seeking him or her – Divinity will intervene to ensure that your paths cross again one day…

– Is never stingy with a compliment.
– Always looks for what they share in common with a person first.
– Is a true champion of Equality; what’s fair is fair.
– Finds beauty everywhere…in everything and everyone.
– Handles even the messiest, stickiest situations w/ grace.
– Is considerate of others.
– Can be counted on to be polite as a rule.
– Shares fabulously.
– Loves harmony in every sense; seeks to live a life in accord with their surroundings.
– Lights up when they have a companion – for Libra, life revolves around togetherness and they love Love in all its forms.
– Embodies sweet and kind as a default M.O.

The Universe is absolutely amazing sometimes…! Tonight while at my yoga class just ahead of the impending Libra New Love Moon, my teacher happened to have this song on the playlist:

“Remove all fear;
Come from where you are to here.
Let your eyes
Meet mine.
For a moment let your heart be mine.

May love mesmerize your soul.
May the devas make you whole.
Can you align yourself in constant devotion;
Find your liberation?

The tears of kindness come
When you love everyone.
Your precious soul is finally found.
Love, infinite love, brings you ‘round….

What a lovely, sweet, and fitting message for the Libra New Moon now upon us…! If there had been any doubt in my mind about this correlation, it was promptly dispelled when I noted the name of the album this song came from – “Wings of Peace”! Peace is such a Libra theme, and perhaps with winged messenger Mercury also residing in this sign (on the fated North Node, no less..!) this message was meant to be shared tonight  ❤

Loooooong ago in a galaxy far, far away, I once had a very Mars-y (ex)boyfriend who used to urge my Libran ass to “Make a decision, even if it’s a wrong one!” –  I find that hilariously funny in retrospect, because it perfectly and succinctly illustrates the difference between how these two energies operate. One pulls the trigger, the other deliberates to weigh the pros against the cons.

One of Libra’s nicknames is “The Fence-sitter of the Zodiac”, which is born partially of its desire to balance opposing forces (i.e. positives vs. negatives) and partially due its consideration for others.  Libra doesn’t just think about how a decision or course of action impacts itself; rather it looks around to see how other people may be affected as well because its natural orientation is toward facilitating harmonious relations, and this can’t be had if we ignore others.

So how ya doin’ out there, Libras?  Ya’ll feelin’ a bit more decisive these days since Mars saddled into your sign back in December?  I know I am!  Let’s see if we waffle during Mars’ retrograde from March to May….!