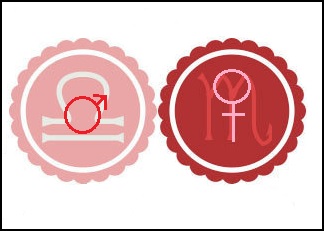 With Venus now settled into Scorpio for the next 3 ½ weeks, we now have a mutual reception between Venus and Mars in place! Mars is the Traditional ruler of Scorpio and with the Red Planet currently traversing Venus’s Libra kingdom while Venus herself occupies his Scorpio domain, this creates an energy exchange even though the two planets aren’t otherwise linked.

What might we expect from this Venus/Mars mutual reception? Well this energy can be a bit problematic for both sexes since “men are from Mars/women are from Venus” and both planets are debilitated in the signs they’re currently occupying. Very generally speaking, men are apt to be more acquiescing while women adopt a more “take no prisoners” approach. Overall this vibe can have a rather “genderbent” kind of feel to it and reversals of stereotypical gender roles in relationships may become more common. This mutual reception can also evoke a “War of the Roses” vibe so do remember this if in the midst of a contentious split and divvying up possessions/assets.

That’s not all, though – the current mutual reception between Venus in Scorpio and Mars in Libra may elicit power struggles in relationships. For best results, focus energy instead on sharing/taking turns/mutual compromise. This duo is also quite lusty and amps up amorous attraction between individuals; while passionate, there is a hazard of leading into a relationship with sex because of this. And as I am fond of saying, chemistry does not necessarily equal compatibility; sometimes it’s like oil and water! More broadly, turbulence in partnerships may be denoted by this pairing; be this for business or pleasure.

The takeaway is to tread a bit more lightly in relationships than we otherwise would for the next few weeks. Thankfully this mutual reception doesn’t last too long and once it’s gone Mars will be in a powerhouse position while Venus receives a lighter, more uplifting boost. And it’s not as if the *entire* mutual reception period is problematic; the trickiest days will be circa Nov 19th as Mars squares Pluto and at the very end of the month near Nov 30th as Mars opposes Uranus just as this mutual reception comes to a close. Think of it more as prevailing scenery that sometimes interacts with us; like the apple-throwing trees in The Wizard of Oz.  😝

Please Note: All literary content copyright ©EmpoweredDestiny.com 2014-2019 unless otherwise notated. The opinions and interpretational analysis contained within this website are the sole intellectual property of its owner/author. All rights reserved. Permission is required in order to copy, excerpt, emulate, or publish these works in print or digital format. If you are seeking reprint permissions, please visit the "Contact" page.